Using middle finger “Gou” and thrum “Tuo” together is a very common combo when playing guzheng. The middle finger and the thumb have to maintain at least an octave distance. In fact, “Gou, Tuo” or “Tuo, Gou” combos are used most often for an octave melody interval or greater intervals. Any interval that is smaller than an octave would require a “Mo, Tuo” combo.
“Gou, Tuo” combo and “Tuo, Gou” combo also have Ti Tan method and Jia Tan method. The approach is the same as doing “Gou” or “Tuo” individually.
When using the combo, the two fingers have to use the same strength. Pay attention to your middle finger - normally people tend to use more strength when using their middle finger as compared with using their thumb. 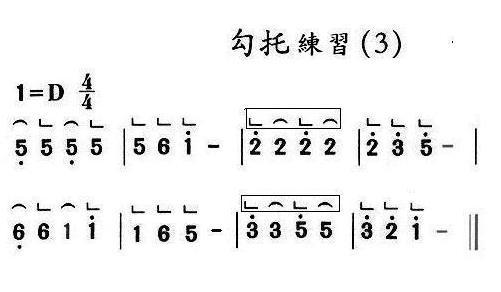 回 : 古箏主頁 back to My Guzheng

回 : 初級古箏指法練習 back to Guzheng for beginners